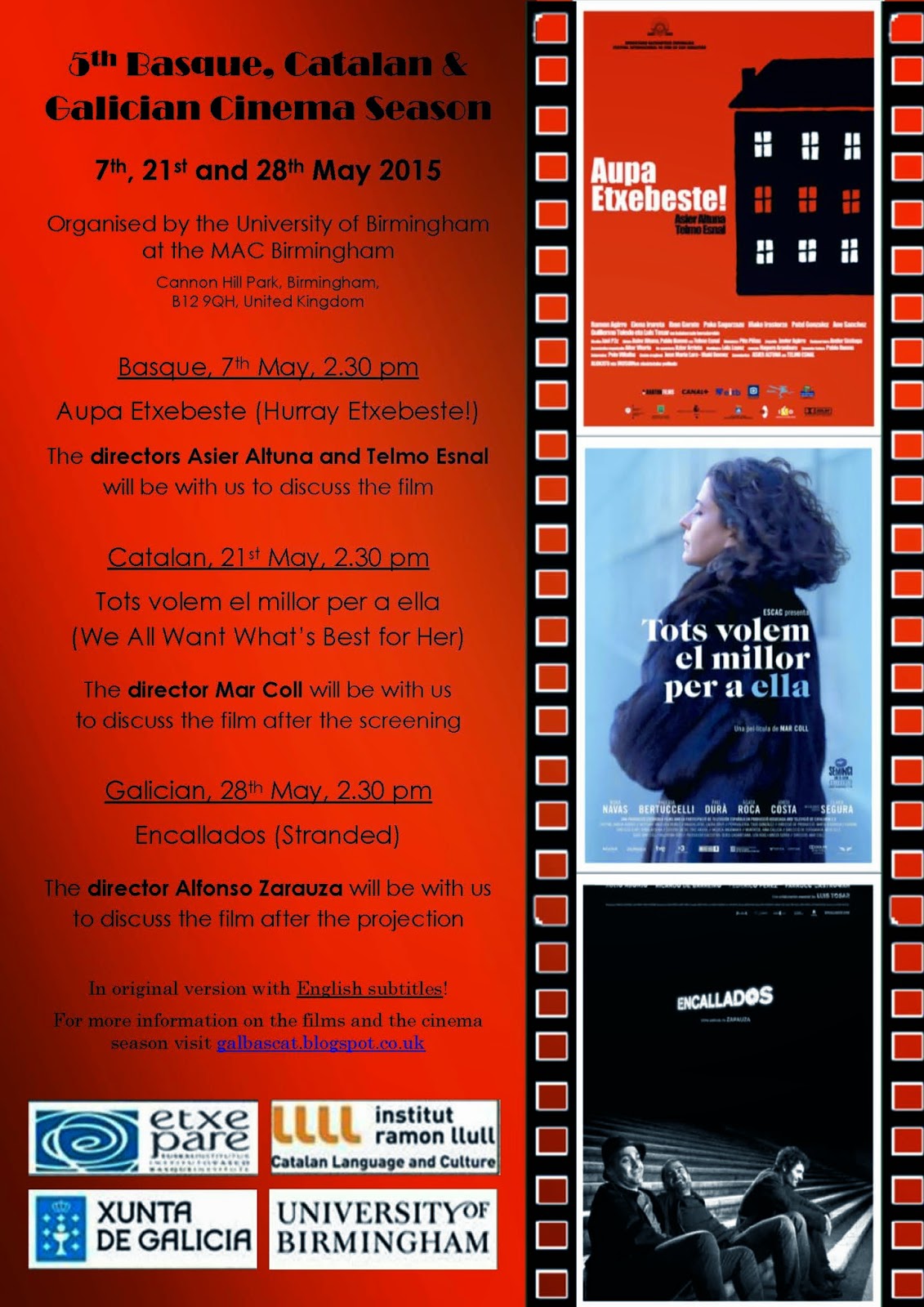 We are pleased to invite you to the 5th BASQUE, CATALAN and GALICIAN CINEMA SEASON. This year’s season will be celebrated in May and will take place at the MAC Birmingham.

All films will be projected in original version with English subtitles. This event is free and open to all.

The activity has been organized thanks to the support of the Etxepare Basque Institute, the Institut Ramon Llull, the Xunta de Galicia and the University of Birmingham.


Thursday, 21st May, 2.30 pm: Catalan film Tots volem el millor per a ella (We all want what’s best for her), directed by Mar Coll. The director Mar Coll will be with us to discuss the film after the screening.


Thursday, 28th May, 2.30 pm: Galician film Encallados (Stranded), directed by Alfonso Zarauza. The director Alfonso Zarauza will be with us to discuss the film after the screening.


We hope to see you there!

Email ThisBlogThis!Share to TwitterShare to FacebookShare to Pinterest
Labels: catalan 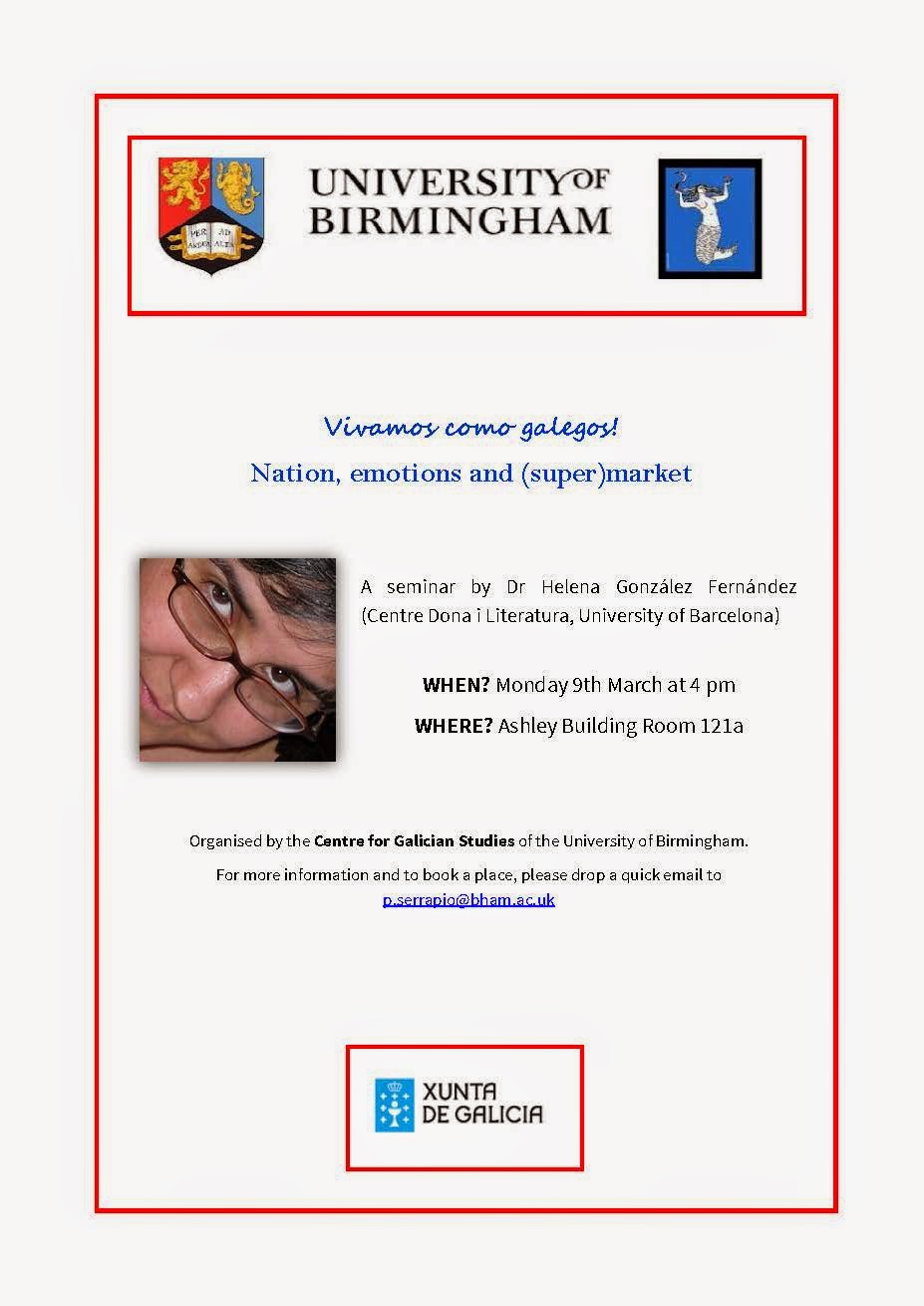 The Centre for Galician Studies will soon welcome Dr Helena González Fernández from the University of Barcelona to give a seminar with the title “Vivamos como galegos! Nation, emotions and (super)market”.


Dr Helena González Fernández is Lecturer in Galician literature and Director of the Centre Dona i Literatura at the University of Barcelona. The main themes of her research are feminist literary criticism, popular culture, Galician contemporary literature, and cultural relations between Galicia and Catalonia.

Her seminar will offer a critical reading of the advertisements of a well-known chain of Galician supermarkets. The ads of this company are quite conservative, but also very popular, and they allow for reflecting on the current society and icons of the popular culture of Galicia.

Where? Ashley Building, room 121a

If you are interested in attending this activity, please drop a quick email to p.serrapio@bham.ac.uk to book a place.
1 comment:

Email ThisBlogThis!Share to TwitterShare to FacebookShare to Pinterest
Labels: Galician

Institut Ramon Llull’s Certificates allows you to prove your level of knowledge of Catalan in both the academic and employment purposes (government, companies, institutions) and are divided into five levels according to the Common European Framework of Reference for languages: Nivell bàsic (A2), Nivell elemental (B1), Nivell intermedi (B2), Nivell de suficiència (C1), Nivell superior (C2).

All of them will take place at the University of Birmingham. Here are the dates for the International Certificate of Catalan Language exams. To register click on the following link: http://oficinavirtual.llull.cat/certificats/ 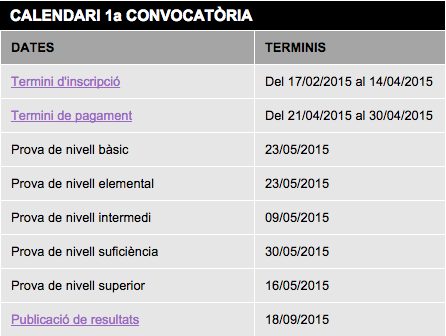 Email ThisBlogThis!Share to TwitterShare to FacebookShare to Pinterest
Labels: catalan

Catalan Studies at the University of Birmingham is pleased to invite you to the screening of the road movie “Mai és tan fosc” (It’s never darker) directed by Èrika Sánchez. This documentary draws a portrait of Arcadi Oliveres through his fascinating biography and the evolution of social movements. (24th February, 4-6pm, Muirhead Tower G15, UoB).

Arcadi Oliveres is a Catalan economist and a renowned activist for social justice and peace. In all these years, Arcadi Oliveres has devoted his energies to many issues: the reporting of external debt, inequality, unfair North-South economic relations, war, militarism, military research and military expenditure; the need for increased development aid in favor of disarmament, the recognition of conscientious objection to military service and military spending in favor of the promotion of responsible consumption, ethical banking and the ways of a “solidarity economy”, etc.
Èrika Sánchez is a director born in Barcelona in 1983. She earned a degree in Audiovisual Communication for the Universitat Ramon Llull. She also has a  Masters in Management and Production. She has made shorts and documentaries, and she has been producing experimental, poetic and political films around migration, labor and new ways of repoliticising citizens.
When? Wednesday, 24th of February, at 4pm – 6pm
Where? Muirhead Tower, G15, Edgbaston Campus, University of Birmingham
The activity will be conducted in English and Catalan, with simultaneous translation. We encourage you to come along and discover more about the World Economy through this genius Arcadi Oliveres.
If you are interested in taking part in this activity, just come along to the venue before prior the start of the film. 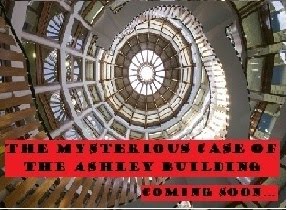